“You need to chop your nails, before you even think of touching the ball”, the coach told Rumi who was greedily looking at the basketball and desperately wanted to score some baskets.

The basketball court faced the junior girls hostel and was newly constructed, earlier the girls had to go all the way to boys court if they wanted to try their hands on the game. The boys and girls hostel were separated by two blocks with an army of guards keeping an angle eye upon the students. After 5 the over energetic ones ended on the courts or the grounds, a total of three grounds, the largest one was the football ground where even choppers could land, while the other two covered a perimeter of 4kms.

“coach, allow me some game today please, I’ll chop them tomorrow for sure”

“nada..can’t risk others for a scratch yaa..”

“but..you know that I am good at boxing out and the air loop..”

“stop irritating yaa..chop the ladies off and come back, I hate casualties on my court..ohkay girls..buckle up..divide the teams, huddle..we begin in 10, Rumi clear the court please..”

“as if..”, hiding her rage which was quite apparent she went down the ground just adjacent to the football one and started her jog which apparently turned into a sprint every two minutes and resumed into a brisk walk after. After exhausting here self out she decided to stop, huffing, puffing and sweating she looked at the watch.

On the other hand the football ground had just started getting warmed up. The only rule that applied to them was the night call which happened every night at 11:30 and at times that was managed too with proxies and at times with some well thought bribery.

Boys took themselves to be invincible and hostel made them feel like kings of an otherwise guarded castle.

With Civil, Mechanical, Electrical, Computer boys all done with their quota of running, stretching and jogging it was time for some action.

The teams were divided, so was the ground, Lilliput, the hard man, known for his short and strong built with energy of an ape, tackled the defense and at times was shown yellow for being over the edge. Aman, the right winger was known for his nutmegging and box-to-box abilities, his snake like agility made him a valuable asset but a dangerous opponent. Sahil was a left winger and a box-to-box player too, but along with that he was the mastermind, for him football was like live chess where playing the minds of the opponent was most important. His layout of field focused on defense while for attack he believed in rapport, he often said ‘attack should be in rhythm but unpredictable, it is like love making, smooth but passionate’.

The trio was known to be the best a team could have, while Lilliput and Sahil were from mechanical, Aman was from civil. The bromance was at its peak during normal days but it turned bloody on ‘the’ days.

Today the trio was on the same side, the spirits were high as usual, game whether normal or for points had to be played with full intent, the ball was passed, dribbled past the opponents, feinted by Aman, passed to Sahil while he crossed over positioning himself for a kick, Sahil dribbled, dogged, made a pass which was successfully planted on the back of the net.

The game went on till half time and the trio were accused of being loaded with players to which Lilliput said, ‘dude, stop being pussies, buckle up, don’t cry since you don’t know tha game..’

LINK TO THE LAST ONE: CHAPTER 2-US

bhoomi_siraj
162
Shaista Fatima or as she prefers going by the name Bhoomi Nighat Siraj, and terms this as her chosen name or takhallus, which is also an ode to her mother, (story around it is deep rooted to finding one's purpose on earth), whose writing and speaking genes she believes to have inherited. She has a masters in mass communication from AJKMCRC-JAMIA MILLIA ISLAMIA. A sufi by heart and a performer inside out she is a theatre artist, an active book reviewer and a communication specialist. Her love for the stage makes her an expert at showmanship and she is ever ready to counsel youth with their endeavours, as a result she looks forward to her work in psychology and communications in the near future. She has published poetry and articles to her credit, has edited novels and believes in writing with the flow. Till date she prefers keeping a journal in hand. In her free time she can be found binge watching or reading autobiographies, fiction, detective novels or sleeping if not doing anything
Related Posts
0 63 0
December 12, 2022
0 19 0
December 10, 2022
0 21 0
December 10, 2022
0 25 0
December 9, 2022 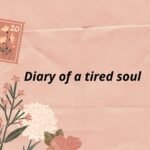