This book was originally published as Benim Adim Kirmizi in 1998, its translation by Erdag.M Göknar, came out in the year 2001, in 2003, Phamuk won the international IMPAC award.

So, one thing I find similar in Turkish Authors is their love for Sufism, not to forget Konya is the land of the great philosopher Jalal-ud-din-Rumi, and one fact Sufis believe in is the art of completing a circle.
This novel starts with a man being murdered and ends with the murderer being slaughtered, what follows in between is the quest to find who was the murderer. I was amazed that the whole book was written in first person and characters were audaciously introducing themselves, the era of 1590, the gullies of Istanbul, the love of the Sultan for calligraphy and paintings, the dexterity of miniaturists and the “secret book”, its commissioning and then two murders back to back, it is not a thriller rather a moving enigma, that will compel you to think and ponder the importance of colours in one’s life.

The color ‘Red’ is not only personified but is also used profoundly. The women characters are conniving and depict how the patriarchal society is often molded via their mind games, the chase after Frankish methods of painting and yet trying to keep intact the methods of the masters of Herat, if you are interested in paintings, their etymology, or their source, this novel will surely stir your soul, as the novel quotes “painting is the act of seeking out Allah’s memories and seeing the world as He sees the world”, to the lovers out their “does love make one a fool or do only fools fall in love?”.

This was my first Phamuk and I am impressed by the intricacy and subtlety with which, love, act of making love, politics and sheer foolhardy is described. 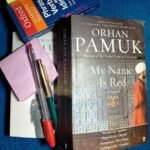